Biography of 'The Jewish Gandhi of Cochin - A. B. Salem' released

Happy to announce that the book ‘The Jewish Gandhi of Cochin - A Biography of Abraham Barak Salem - Indian Nationalist/Zionist’ by Bala Menon and Dr Essie Sassoon, has been released worldwide on many retail platforms (Amazon, Barnes & Noble, Infibeam, Book Depository, Indiabookstore etc.)

An official launch will be made in Toronto this month... 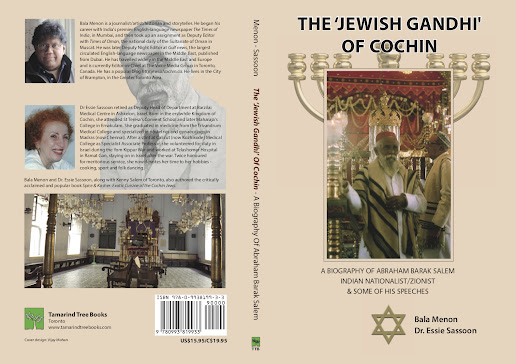 Abraham Barak Salem was a brilliant lawyer, labour union organizer and ardent Indian nationalist and political leader in the erstwhile Kingdom of Cochin in the early 20th century. A strong follower of Gandhian principles of peaceful protests and civil non-cooperation techniques, he was one of the three general secretaries of the Indian States’ Peoples Party, the Congress Party wing in the princely states of India.

He was a member of the famous Lahore Session of 1939 which passed the resolution calling for complete independence or Poorna Swaraj from British rule.

Salem was a founding member of the Cochin Legislative Council way back in 1925, which set the stage for democracy later. If Kerala is known as the most literate state in India today, it was because of Salem who first introduced a bill for free and compulsory education for all in the early 1940s. He also pioneered great social reform bills like Pension for Widows and Food Rations For The Poor in the Cochin Kingdom. A powerful orator, the largest open ground in Cochin was once known as Salem Maidan. He was also part of the Gandhian temperance and lower caste temple entry movements in Kerala.

He was friends with top political leaders of the time like C. Rajagoplachary, Periyar Ramaswamy Naicker, Sardar K. M. Panikkar and Jawaharlal Nehru. In Teen Murti House there is a large photograph of Salem with Nehru - the only one where Nehru is shown with a single individual.

Salem was also the man behind the mass emigration of Cochin Jews to Israel, because of his friendship with Israeli leaders like Yitzhak Ben-Zvi, Moshe Sharett, David Ben Gurion and others - although he and his family chose to stay back in his beloved state of Kerala. Salem, who died in 1967, is buried in Mattanchery in Cochin. There is a road named after him in the area.