'Gramophone' - A Malayalam Movie Set in Jew Town of Cochin

On Tuesday, May 14, when I switched on my TV and surfed to the Malayalam satellite channel Kiran TV, I found the movie being telecast was 'Gramophone'. Although I had seen it before, it was still a fun movie  to watch.
The story of Gramophone swirls around Jew Town in Mattancherry.  Many of the antique shops and the bustle of the street are background frames and some of the ambience has been captured on camera by director Kamal, who also wrote the story along with Ikbal Kuttipuram.. The movie begins with dawn breaking over Jew Town and later in the movie, there is a shot of the interior of the Paradesi Synagogue (although it looks like an old photograph). There is also a Hebrew prayer.
'Gramophone' was made in 2003 and had a reasonably successful box-office run and has been available on DVD for some time.  (The 24-hour  Kiran TV channel telecasts a Malayalam film every day to 27 countries including the United States, Canada, to Europe and throughout the Middle East.  Many of the Cochinis in Israel must have had a chance to see it on Tuesday).
The plot revolves around a few old and struggling Jews, who are shown as having got left behind after the  exodus of the Jews of Cochin to Israel.  (The truth is that they chose to stay!) Some sharply drawn characters include an old Jew named Gregory (played by veteran Janardhanan),  his daughter Sarah (Revathi) and granddaughter Jennifer (Meera Jasmine). Gregory still dreams of emigrating to Israel with his family - in the hope that somebody from there would marry his granddaughter.
On Jew street lives Sachidanandan (Dileep, one of the leading film stars in Kerala), who runs an antique shop selling mainly vinyl gramophone records. Others who people the plot include Hindus, Christians and Muslims - reflecting the mosaic that Cochin once was and is still is… Well-known character actors, the late  Oduvil Unnikrishnan, the late Murali, the National Award-winning Salim Kumar, along with popular actress Navya Nair, add strength to the story.
The comedy-drama, however, sticks to the 'romantic formula' of commercial Malayalam cinema and there are songs and dances and a love triangle all thrown in. Then, news arrives that a young Israeli soldier is coming to Cochin from Jerusalem to marry Jennifer. Gregory is delighted, while Jennifer pines for Satchi.
The film ends with a delightful twist. A highlight of the film is Vidyasagar's Hindustani classical mix. There are a couple of good songs by Yesudas as well. 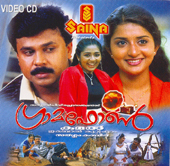 (Although several documentaries have been shot in Jew Town to record the history of the community, it seems strange that there has not been a serious full-length feature film. The Malayalam film industry is one of the most prolific in the country and the story of the Cochinis could have been made into a heart-pounding classic. There have been wars, high finance, diplomacy and intrigue, kings and princes, religious fervour, romance and everything else needed for a high-octane drama in the 2000-year-old story of the Jews of Cochin. Plus, there have been music and dance, too!).
The full movie Gramophone can be seen in 13 segments on http://www.youtube.com/watch?v=qPc2qShg6H8.